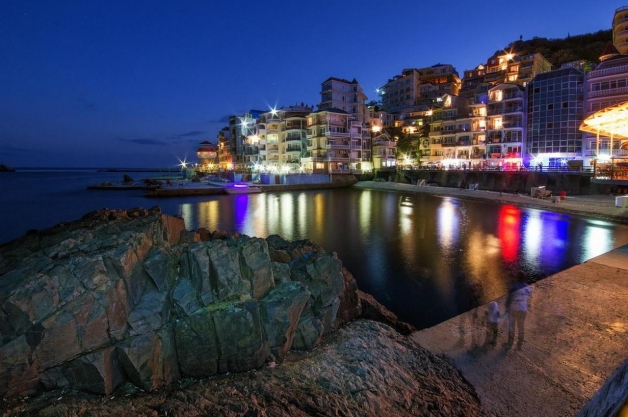 Moving along the mountain road from Simferopol to the South coast, Alushta will be the first city on the way. The resort town covers an area of less than seven square kilometers, and a second popular place after Yalta. The permanent population is 29,670 people (Russians and Tatars, Armenians and Greeks, Bulgarians and Karaites). Local residents should be called “alushtintsy”, and they are typically small townspeople – very openhearted, communicative and friendly.
In the summer season, the air temperature is above + 22°C, in the winter – does not go below +2 ° C. Winters are not cold, but it is worth mentioning the local strong sea winds. Alushta is conveniently located on the southwestern shore of the Crimean Peninsula, between the villages of Solnechnogorsk and Utes, in the territory called the Big Alushta.

Alushta is one of the most profitable resorts of the whole Crimean Peninsula. Located at the intersection of land and water transport interchanges, it has a developed urban infrastructure. There are Universities, schools and colleges, 7 hospitals, including a children’s ward and ambulance service in Alushta. In 2013, a large sports complex for Olympic athletes with a capacity of 500 people was built in the area of 100 thousand m2 ( located in eight hundred meters from the shore). Fifteen tennis courts, synthetic surface for running tracks, six gyms were built here.

In the area of Popovskaya Balka, the only industrial zone of The town, motocross competitions are held. There are aircraft tourism that actively developed and own yacht club is being built in the city. Climatic conditions allow growing fruit and tobacco on an industrial scale.

However, the key city-forming industry is viticulture and winemaking. Alushta is justly called the capital of the Crimean winemaking. The latter was founded in Alushta in 1830, when the landowner a Petrychenko D. and Earl M. Vorontsov planted Cabernet, Kokur white, Grenache, Aligote, Albilio, Chasselas and Semillon juice and mash which was made table dry wines. For reference, all wines that are consumed during a meal are considered to be table wines. It contains alcohol from 10 to 14% and sugar-0.3%.

Later in 1889, the winery was bought by the trading house Tokmakova-Molotkova Affairs and production went uphill. The new leadership hired a professional in his field — winemaker Kashin S., who carefully studied the features of the soil, the local climate, as well as the average temperature. Upon completion of the preparatory work, Kashin found that the region is most suitable for growing grapes suitable for making dry and fortified wines, mostly due to the long and hot autumn. His recipe for the production of Madeira wine, a white Muscat and Tokaj wine has been preserved to the present time. The technology of preparations for Tokaj wine (“wine of kings”) is quite specific – the fruits are infected with fungus during maturation. Perhaps the most famous brand is the table wine “Alushta”, which is worth a try in the tasting room Solnechnogorsk village — Grotto Seventh heaven.
The symbols of Alushta, in addition to viticulture, include a monument to the Olympic bear and rotunda on the Waterfront, as well as a modern water Park with beautiful views of the sea, two dolphinariums, and an aquarium.

The town of Alushta, located on the southwestern coast of Crimea, in the area of Bolshaya Alushta from the West is protected by "yayla" (the name comes from Turkic language meaning plateau, suitable for pasture) Babugan with the highest point of 1545 meters - Roman Kosh, from the North-East-Demerdzhi-Yayla - 1355 meters. There is an inactive volcano Kastel with a height of 439 meters by the seaside. In the vicinity, there are passes Kebit-Bogaz or Kebit height of 752 meters and Hangar-Bogaz or Angarsk - 591 meters. The river system is represented by the Ulu-Uzen and Demerdzhi rivers, on which The Izobilnensky and Kutuzov water reservoirs are built.

The circulation of air masses in the mountainous part provokes the formation of constant cold winds in winter and cool refreshing breezes in summer. Hence, one of the theories about the origin of the name of the city – "Alushta" - from the Turkic "draft,draughty". For this reason, there are cool winters and the summer heat is easy to tolerate. The swimming season is open from the first third of may until the end of October, the beaches are shallow. In summer, the water can warm up to + 26°C. However, it often happens that around noon, the coastal wind from the West, where the highest part of the Crimean highlands is located, as well as sea currents cause a sharp change of water moves off the coast. And to the surprise of tourists, heated water is replaced by fresh and clean, but cold-about 13 ° C. The average annual temperature is 12.5°C.

The subtropical climate and long hot autumn are the key factors in growing fruit in the valley and grape varieties such as Kokur Bely, shasla, Grenache, Aligote, Cabernet, Albilio and Semillon, which are ideal for the production of fortified and dry table wines.

The oldest Crimean nature reserve (1913) stretches on the treeless slopes of the Main Ridge of the Crimean mountains on the area of 440 square kilometers. The iconic trees of the reserve are relict yew trees that live for more than four thousand years, oaks with a trunk diameter of two meters and forty-meter pines. The source of "healing water " Savluh-us (translated from Turkic) contains silver. An Orthodox monastery of St. Kozma and Damian was founded in the vicinity of the Savluh-su. Local forests for centuries abounded with deer and roe, and therefore in 1887, they were chosen for the hunting of Alexander III, and later Nicholas II. Rivers and ponds are home to trout and a rare hybrid of Beluga and sterlet – Bester.

A few words about the ecological situation: there was information about the growing garbage dump on the territory of the former landfill in the foothills of the Demerdzhi in summer 2016. It became common knowledge that garbage from Yalta was brought here.

The situation with nightlife and other Alushta entertainment is perfectly fine. There are restaurants, bars, and Nightclubs by the seaside that are working till the last customer. Famous Russian pop stars visit Alushta quite often.

Town-Alushta - the third most popular among the audience of the CIS resort of the Crimean Peninsula (after Yalta and Yevpatoria). Compact and highly developed infrastructure of the resort allows enjoying holiday both with family and children and the young company. The walk to the beach even from the most remote point of the city takes about 25 minutes. According to the reviews of tourists, here in Alushta during high season guests can find the most pleasant audience throughout the peninsula.

For a small town of 7 square kilometers, the choice of nightlife is quite large. Clubbers will be pleased to find good Electro House and Techno music playing around, for example in the café "Hermitage" (higher price segment), Nightclub "Cave", decorated with artificial stalactites. For jazz connoisseurs, too, there is a pleasant company and specific atmosphere. Sound Club-the most democratic place located on the coast of Alushta. During the daytime, the traveler can lie down under the sun on the loungers, smoke a hookah, and there is a special program with animators for children, exciting shows for adults. With the sunset in the Sound Club begins to operate a chill-out zone with numerous themed parties. The El Faro restaurant, the average check of 1,000 rubles. Cozy atmosphere, impressive fish menu and the famous Crimean tea will best complement the busy resort day. The largest nightclub in Alushta-Kiwi-Kiwi is adjacent to the aquarium. Two floors of the restaurant have two dancing halls and lounge area, VIP room.

There is reason to believe that the first sites of the ancient man in the Crimea appeared on the territory of Alushta valley (Paleolithic – about 2.5 million years ago). Famous astrolatry, the probable birthplace of the cult of fire – the cromlech, research magnetic anomalies which were held since 1886 and is still underway. The main purpose of the cromlech construction is close to the Ural Arkaim. Stonehenge Alushta is twenty-eight blocks of stone of volcanic origin-diabase grouped into arcs, which correspond to the cycles of the year and week. It is not possible to determine the exact age of the object, due to the fact that archaeological research has not been carried out, but according to the basic hypothesis cromlech at least three thousand years.
It is noteworthy that the ethnicity of the local ancient settlement Lampad (mentioned in the writings of Skimn Chios) was not determined. Later settlers were tees, goth-tetroxide, and Alanna.

Alushta - "Aluston", Genoese Lusta, Salusta or Luska – variations of the name of the town of the southern coast of the Peninsula. Scientists still debate about the origin of the variations of the original names: the Greek version may also be translated as "the unwashed", but the Greek language was not popular among inhabitants of Aluston until the X century BC. On the other hand, the name "Aluston" was first mentioned in written sources as early as the VI century, in the treatise "About buildings..." Byzantine Procopius of Caesarea. It shall be certified by the construction of fortifications in the modern Alushta and Gurzuf (Gershovich). According to another version - "Saluste" – comes from the Indo-European / Indo-Iranian (language group, presumably the Taurus) sala sal-osta — "mouth of the mountains". Translation of the German word "alusta" and Dutch place names Alosta, Elst, else, means "alder", by the way, overgrown along the banks of local rivers – alder. The most recent version of the origin - from the Turkic word "draft" - a tribute to the regular local strong winds.
Built-in the sixth century AD, the Byzantine fortress of Aluston was located in the center of the modern resort, on the main course of sea trade routes from Chersonesus Tavrichesky (Sevastopol) to Kaffa (Feodosia). Proof of this is the findings of the underwater archaeological expedition(1991-1995) of the Kiev National University T. Shevchenko.

The Byzantine Empire in 1204 will give way to the crusaders, and in 1299 Alushta will be burned by the Tatar-Mongols. After the Venetians, the territory of the city, according to a number of contracts of sale, 1380-1387 gg. will become a possession of the Genoese. When Aluston fortress was rebuilt: the fortifications, (walls were 3 m thick), the main tower 12x12,5 meters, and the total area of the fortress 16,875 square meters. Historical essays and descriptions of the Christian Principality of Theodoro (XII – XV centuries) were destroyed during the Turkish-Ottoman invasion of 1475 (Sudak kadylyk). And as most of the cities of the Northern coast of the Black sea, Alushta fell into oblivion until the Russian Empire invasion. At this time, the Foundation will be laid for the rural and economic development of the city, the key areas of which will be fruit growing, tobacco growing and, of course, viticulture and winemaking.
On 4 November 1941, the Nazi German army occupied the town but did not destroy the inhabitants because of their Aryan origin since they were aware that the local area was inhabited by Goths. In the battles for the city in 1944 was destroyed three-quarters of the resorts.
However, the town of Alushta will become a resort place only after the second world war. In the period from 1959 to 1961, a high – mountain trolleybus road will be launched, which will serve as an even greater incentive for the development of the recreational industry of Alushta. And at the time of the most vivid development of the industry, the number of resorts will exceed 7 dozen and a total capacity of 15 thousand people. Of course, the subsequent restructuring will make its adjustments, but by 2003 the Soviet economic records will be surpassed.
Modern Alushta is a climatic resort, where aircraft tourism, diving, and mountaineering are actively developing. Soon will begin to operate its own yacht club and its annual Alushta boat Show.