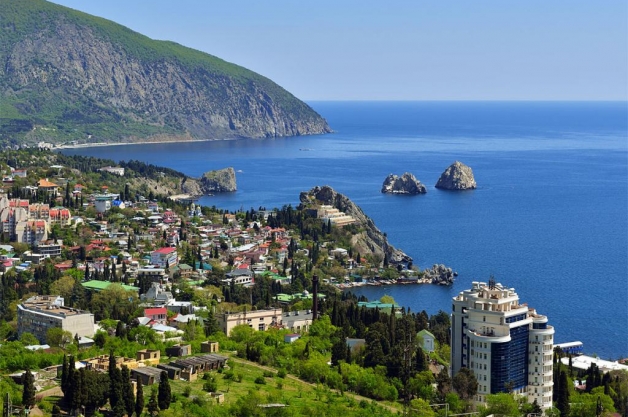 Small town-resort of the southern Crimean coast, located at the mouth of the river Avunda in Gurzuf valley. This urban-type settlement covers an area of almost five square kilometers and has a population of 9,155 people. There are no industrial enterprises in Gurzuf. No doubts, that this fact have a positive impact on the local environment. Even the local transport is nature-friendly. The legendary long-distance route, which is also the longest trolleybus service in the world – 52 kilometers to Alushta and Yalta – 86 from Simferopol through the village passes here. The decision on mountain trolleybus line construction was made in USSR in 1958 during which more than two hundred thousand meters of a contact cable were suspended. During the last century, beach season trolleybuses ran along the route every 2 minutes, and tickets for the ride were available at railway stations from Moscow to Vilnius.
Other significant features of importance include the mountain – the Bear (form resembles the body of the animal) or Ayu-Dag, a height of 571 m. Mountain’s geological origin called laccoliths — (al-Greek. “hole, hollow” and “stone”) or “unsolicited volcanoes”. A whimsical shape was formed as a result of the cooling of the magmatic core before the internal pressure of the molten rocks managed to break through the surface layer. The territory of Ayu-Dag is a landscape reserve, in which, unlike the reserve, protection measures are envisaged for certain species of animals, plants, fish or birds. The rocky terrain of the Gurzuf valley gave the town another natural miracle-the rock of three hundred meters from the coastline, about fifty meters high, called Adalar (Ada — “island” and the suffix of plural – “-lar”).

The mild sub-Mediterranean climate, as well as the natural protection against sudden temperature changes in the form of high Crimean mountains and the Black sea, created ideal conditions for the establishment of the children’s camp of the same name in the Artek tract in June 1925. Establishing a Health resort for teenagers was original idea of immunologist, co-founder of Taurida national University, Sergey Metalnikov in 1921. The chief Executive of the legendary Artek — Zinovy Solovyov. In the first summer of the camp Artek, the health-improving institution took three hundred and twenty children, prone to tuberculosis, who lived near the sea in furnished tents, with floors made of yew. The conditions for the life of the pioneers was performed at the highest level: the best tent is reserved for the detention center. The library, study groups, white tablecloths with a ring on the napkin in the dining room were organized. After the reorganization of the camp in 1928 began to invite foreign guests from Europe. Clara Zetkin (famous German politician), who later said that the children of Artek looked free and happy.

A funny monument to the cat, looking at the sea, was installed in Gurzuf in the spring of 2013 on Chekhov street. Belarusian artist Oleg Larionov and an employee of the Korovin creativity house became co-authors of this creation, commemorating the many famous well-fed cats and cats of the village of Gurzuf.

An urban-type settlement Gurzuf is located seventy meters above the sea level on the slope of a hill Balgatura Nikitskaya mountain pasture, fenced off from West high (up to one and a half kilometers) by the Crimean mountains, including the highest point on the Peninsula - the Roman-Kosh, and from the East and North-East by the Black sea. The landscape barrier and the huge reservoir of sea water have a mitigating effect on the local climate. The valley is dominated by the so-called sub-Mediterranean dry climate, typical of the South-Eastern coast of France and the Italian region of Lombardy. The average annual rainfall is 550 mm, and the temperature is 13.3 °C with an absolute maximum and minimum of 39 °C and -15 °C, respectively. From late spring until the end of October, and sometimes November, the water in the sea warms up to 18 °C.

An interesting fact: the Black sea does not freeze in winter, but there is reliable evidence that the sea was covered with ice in 401, 1011 and 1620 and is likely to freeze in 2230.
Local summer is dry, but due to the constant sea breezes it feels quite comfortable, the main rainfalls occur in the second half of autumn, and snow is rare in Gurzuf. The high season is from July to August when the coastal air and water of the coast warm up to 27 °C. The village is equipped with sixteen beaches, some of which are not possible to reach on foot. Well known Islands Adalar(s) surrounded by absolutely clear water, but the rocky underwater part had destroyed enough ships. Latter is the main factor why divers and underwater hunters of antiquities love Gurzuf. Avid fishermen will enjoy the local inhabitants of the depths-a mackerel, flounder and mullet. From ground fauna it is possible to meet deer and roe deer; pheasants, cormorants are most brightly presented from birds.

To promote recreation in the village of Gurzuf were installed three Webcams, including panoramic.
The vegetation cover of the mountain and coastal zones vary greatly: the first is dominated by coniferous pine forests (endemic - Crimean pine), and the second – shrubs and undersized trees. Oleoresin, pine resin, has a decontamination effect, releasing phytoncides into the atmosphere. The most striking representative of shrub plants is dogwood, which is translated from the Turkic "red", edible red berry, which has a kind of sweet and sour taste. In the mountain range, there are teas (gardens) with wild fruit trees and nuts, and mushrooms (boletus, white mushroom) can be collected throughout the year.

The whole area is literally littered with small cafes and restaurants. The local kitchen is very tasty, especially the kebabs.  The ones that made of fresh fish are a real masterpieces. The Gurzuf nightlife is not too diverse. Discos, clubs: nothing supernatural, but if you come to rest and enjoy the sea – that's more than enough. And Yes, they are indeed worthy of attention.

The name of the town Gurzuf (Garsoian, Garson, Arsonium, Hortorium, Gorzuvity) comes from "ursus" (Latin.)- "bear", and according to the Albanian language in the adverb phrase" Gor-dzakh" translates as "valley in the mountains". The foundation date of the settlement is not yet determined. There is a theory according to which Gurzuf is the oldest settlement on the southern coast of Crimea. Gurzuf valley preserved traces of settlement of the early Eneolithic period (VI – III Millennium BC). There were found Taurus layers of culture (VII-VI centuries. BC) with molded dishes; on the Ayu-Dag fragments of a large settlement of Tauris, and in the area of the highest mountain pass of the Crimean mountains Gurzuf saddle – the ruins of the sanctuary (III century BC – III century ad) during the archaeological excavations near the town. Moreover, the finding of the Holy tavra temple was absolutely random: in the end of the XX century, a gas pipeline was laid next to it. During excavations in 1981 on the territory of the past one thousand unique artifacts were found. Amongst them were the Golden statue of Chersonesus (first century ad), and the first surviving scutum shield Roman Legionnaires found in the world. Due to the fact that the snow cover the hillside for more than six months a year silver and glass products were preserved in excellent condition. The brands were hunters and fishermen, practiced human sacrifices and had a special ritual burial of the tribesmen. Relatives buried, lying on a side, in stone boxes, covering a massive plate.

The first written references are found in the treatise of the VI century ad, the Byzantine historian Procopius of Caesarea, "On buildings". It tells how the Emperor Justinian I ordered to build a fortress in Gorzuvity. The latter will exist here until the beginning of the XVI century and will serve as a military shelter to representatives of the Byzantine Empire, and later the Khazar khanate and the Republic of Genoa.
In the period from 1475 to 1774, the village was part of the Ottoman, and later in 1783 – the Russian empire. Gurzuf region at the turn of XVIII-XIX centuries was reigned by Novorossiysk Governor General Emmanuel de Richelieu. From 1825 to 1837 the road Simferopol - Alushta – Yalta – Sevastopol was built during the duke Vorontsov. During that period Ivan Fundukley laid the foundation for vineyards. P. Gubonin began the active construction of resort recreation. Gurzuf Park was landscaped, as well as hotels, a hospital and a power plant, the first wine cellar was built, in which were wines from Spanish and Portuguese grapes, in 1847.

In the early XX century, the resort began to fade gradually, despite the fact that there was already a branch of the resort station for the military. And only the Foundation in the tract Artek children's camp gave a new round of development Gurzuf.