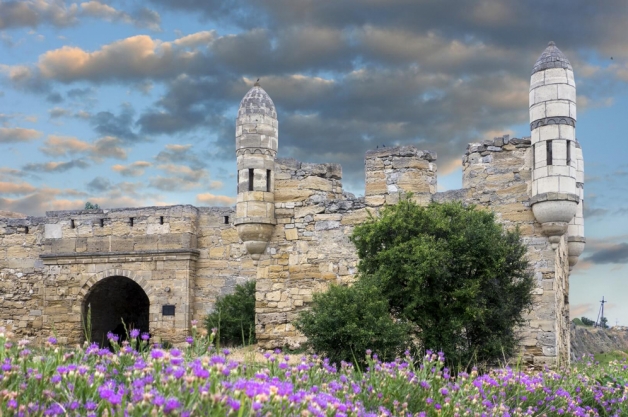 Kerch is a guardian of the Crimea, a city with a difficult but good fate.
52 kilometers of the city coast is washed by the Black and Azov seas, by the waters of the Kerch Strait and Lake Sivash, with different temperatures and salinity. The total area of the city is 108 square kilometers, a population of about 150,000.

Modern Kerch is a huge port and an industrial center with three shipbuilding and six heavy industrial equipment plants. There are mining enterprises, metallurgical combine and even a producer of power plants. From this we can conclude that tourism is not the main sphere of the city’s economy: there are even no beaches within city boundaries. But, despite the fact that the tourist industry lags behind its development in comparison with other cities of the Southern coast of the Crimean Peninsula, these beaches are very welcoming and the swimming season opens here from the end of spring through mid-September. The beaches are predominantly sandy, with a very shallow coastline, and a shallow depth creates ideal conditions for warming water and relaxing with young children.

After 2014 Kerch became the most ancient city of the Russian Federation, moving Derbent to second place. The Crimean port turned out to be older for no less than six centuries. In 2018 it will be 2618 years old.

The Scythian treasury from the Scythian royal mound deserves special attention. The burial place is strikingly different from other structures that were assigned to the same historical period and look more like Egyptian tombs. During excavations, an external resemblance of “Scythians” with the Slavic tribes were proved. The jewelry in the treasury was of very delicate artistic work and not inferior to modern examples.

Several tens of quarries – the so-called Akimushka quarries with a whole network of passes, many of which have not been fully explored, are a very interesting historical object of Kerch. One of the corridors is six hundred meters long, led to the shore, where during the Great Patriotic War the military fortifications were located. In memory of 12 952 soldiers who died during 170 days fascist siege in 1942, they turn off the lights for a short moment for groups of travelers who went down that corridor.

UNESCO’s “Silk Road” route (operating since 1993) will also pass through the hero city of Kerch. The small planet (2216), opened in the early ’70s by T. Smirnova, was named after this ancient city.

The special proud of Kerch residents is the heraldry of the city – its red and white flag (1999), created by the chief architect of Kerch A.A. Salnikov, a anthem and a coat of arms with a mythical Griffin, which the local people see as the patron of the city, guarding the keys of the seas. On the coat of arms, the griffin symbolizes power, strength, vigilance, and speed. The anthem is full of devotion to ancient history, the people of Kerch and their exploits, there is a mention that there is “a line in the Bible” about Kerch. The red color of the flag symbolizes the vigorous power and courage of the city’s defenders, while white is an honor and noble thoughts. The colors of the red and white flags were used by the ancient sailors of Panticapaeum. The same colors have the temple of St. John the Forerunner (757 years). The name of the mighty capital of the Bosporus kingdom probably originated from the “panticap” – Iranian “abundant with fish.” It is definitely known that the Imperial palace was supplied with the famous Kerch herring, which was the staple for local residents.

Kerch is an impressive archaeological reserve of the Crimean peninsula. We recommend not to miss the opportunity to explore this ancient city while making your travel plans for Sochi and Crimea. Check our website for more detailed information on tours to Kerch.

Kerch is located in the eastern part of the Kerch Peninsula. The landscape is steppe with small hills (the highest point is 91.5 meters - the mountain Mithridates) and ravines. The river system is comprised of region's two main rivers Melek-Chesme and Bulganak.

The climate is moderately continental, with the steppe-sea features, characterized by mild winters and hot summers with heavy, heavy rains. The average temperature of the hot season is + 23.5 ° C, and -1.2 ° C in the winter. The high temperature in the summer season is to some extent a result of shallow bays, which are warming much more in the summer than in Sudak, Alushta or Sevastopol. Being at the junction where meet atmospheric masses of the Azov and Black Seas, as well as the mountain ranges of the Greater Caucasus, the climate here, has sharp changes in temperature and a unique system of air circulation - sea breezes do not allow clouds to stay over the coast. In summer, the water warms up to + 24 ° С, in winter is around +5 / + 8 ° С. In the cold winters, the Kerch bay and the Kerch Strait are covered with ice. The number of sunny days in the year is 215, and the average annual rainfall is 390 mm, which is considerably lower than the central part of the Crimean Peninsula.

Stunning imagination is the famous Lunar Valley of the Kerch Peninsula, covered with small craters of active volcanoes. The highest of them is Jau-Tepe (60 m, Bulganak field, near Vulkanovka village). The mud streams saturated with mineral salts, which periodically is blown into the air at a height of up to ten meters, are cold (18-19 ° С) and, unlike other types of volcanoes, have a different nature of origin. But the depth of these unique natural wonders - more than sixty kilometers. The last eruption of Jou-Tepe was in the early eighties of the previous century. After abundant rains, you can observe the formation of large mud lakes in the valley, called Koli.

Tired of architecture and not fancy swimming anymore? Then head to one of the local entertainment centers, nightclubs, casinos or billiard halls. Fortunately, there are plenty of such establishments in Kerch. There is a wide choice for dining, including fine cafes and restaurants in the city. The prices are quite adequate and won't cause substantial damage to your wallet. And do not forget to try the famous Kerch herring.

Nightlife in Kerch will not let you get bored with a variety of choices available. Incendiary music, good company, and good mood are guaranteed.

The earliest evidence of the settlement of the territory of the Kerch Peninsula is from forty to one hundred thousand years. In the vicinity of Tobechik lake (12 km from the city of Kerch), archeologists found the Neanderthals sites dated by the Middle Paleolithic period, and in the city itself the teeth of the mammoth.

The Greek settlers from the city of Miletus from the western shore of the Asia Minor Peninsula founded the Panticapaean settlement in the 7th century BC. The fishing village grew and by 480 BC became the capital of the kingdom of Bosporus. The satellite cities of the Panticapaean in those times are Tirataki (Pashintsevo village), Mirmeki (Voykovo village), Nymphey (Geroyevskoye village). As the capital of Panticapee will exist for the next nine centuries.

The most ancient of the famously written sources, telling about the life of Kerch Peninsula population is the history of Herodotus (V in. BC). In the VI century BC they minted their gold and silver coins here. The city of Panticapee, encircled with powerful defensive walls with bayonets, occupied more than a hundred hectares together with the surrounding polises, its port could accommodate more than thirty ships. The Bosporus kingdom stretched from the territory of Novorossiysk to the upper reaches of the Don River. The walls served as protection against regular raids by Scythian tribes. King Perisad V observing the decline of his state in the second century BC, decides to become a vassal of the Greek Pontic state, which at that time was the main opponent of the Roman Empire. The nomads of the Scythians refused to obey the foreign rule and killed Perisad, who was revenged by the troops of the Pontic king, Mithridates VI Eupator (130-63 BC). Panticapoy soon became a Roman vassal for the next three centuries but was destroyed by the Huns in the IV century AD. Later, the city was part of the Byzantine Empire and in the 6th century AD the Bosporus fortress was built on the initiative of Emperor Justinian. The Byzantine rulers will return to this territory once more in the 12th century.

Under the Khazar rule in the 8th century, Kerch acquires a new name - Karsha / Charsha (turk. "Market"), and under the Kievan Rus it was known as Tmutarakan, from the 9th to the 11th centuries known as Korchev / Korcha ("korch" means forge) Since 1318, the Italian Genoese Empire, that sought to capture major cities along the Great Silk Road and establish a monopoly on key, high-value goods from the East, has added Korchev to its possessions. The Italians sought, above all, to capture the city of Tanu - nowadays Azov, and in trade policy, they relied on merchant associations.

Subsequently, the strategic city of Kersch, with its stone dam and harbor for more than two hundred ships, became part of the Crimean Khanate (the so-called Crimean Yurt, 1441-1783gg.) that formed after the disintegration of Tatar-Mongolian empire. And after the defeat of the key Genoese Kaffa colony in 1474, the Crimean peninsula fell into the vassal dependence of the Turkish Ottoman Empire. Azov became a Turkish military fortification, which at the end of the XVII century will be captured by Peter I. The first naval ships of the Russian Empire will swim past the port of Kerch in 1699. It was after this demonstration of force, that Sultan Mustafa II gave orders to the Italian architect Goloppo, who converted to Islam, to quickly build a new fortress in the port of Korchev. Yeni-Kale (turkish "yeni" - new, "kala" - a fortress) was completed in 1706. In the early 18th century, the depth of the Kerch Strait was sufficient for the passage of large military vessels to the Black Sea only near the port of Kerch, which was precisely within cannon shot distance from Yeni-Kale.

After the Azov War, there still were several major Russian-Turkish military conflicts, the last of which in 1768-1774 secured a right of Russian Empire to the Kerch Peninsula, as well as the Crimean Khanate recognized independence from Turkey.

Being part of the Russian Empire, the city did not enjoy particularly rapid development. Only in the middle of the nineteenth century the first railroad plant was built and in 1867 the first tobacco factory.

In 1870 the first intercontinental telegraph line was laid at the bottom of the Strait by the Siemens company.

The War of 1941-1945 left an indelible trace in the destinies of Kerch residents: the city was twice occupied and subsequently twice liberated from the German fascist invaders.

In 1973, Kerch was awarded the title of the hero city.

The obelisk of the heroes' fame, the first in the whole of the USSR, was erected a year before the end of the war. Around its central column are capsules of land from Novorossiysk, Tula, Volgograd, Murmansk, Smolensk, Odessa, Kiev, Sevastopol and Minsk. In Adzhimushkay quarries died 15 thousand people - soldiers, sailors, artisans, residents and their children. The names of Volodymyr Dubinin and Pavel Yagunov will forever remain in the memory of the locals.

The annual torch processions on the day of the surrender of Germany pass on Mount Mithridates.