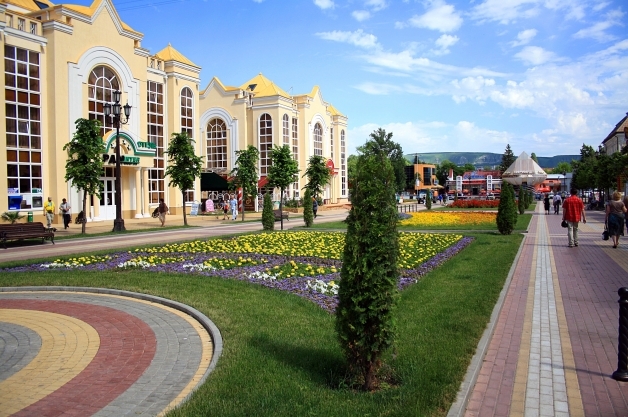 Kislovodsk holds first place for several resorts, second place in population among the resorts of KMV, and absolute superiority on sunny days. More than eight hundred of archeological sites have been discovered on the territory of a modern city, the earliest can be attributed to the fifth millennium BC. There is a fortress in the center of town, which began the history of Kislovodsk. It has been repeatedly rebuilt, but even after the Caucasian wars, unlike other military fortifications in the region, preserved in full with gates, battlements, and weapons workshops. Almost all tourists observe the city's architecture of the pre-revolutionary times. Some projects were designed by Italian architect Bernardazzi born in Switzerland. Narrow streets, small residents’ houses...  All 20 resorts built before the great Patriotic war correspond to a high sanitary & technical requirement, in line with the latest at that time. A special peace & tranquility atmosphere is preserved here.

Resort Boulevard is also referred to as heart of the city or "Poplar alley". This ancient park dates the nineteenth-century occupies a thousand acres of man-made architecture. There are several trails of varying degrees of complexity, medical terrenkury, pergolas, and rose valley. Spa Park is not a collection of commercial stalls and carousels. A large area allows travelers to feel relatively secluded, opens quiet corners and picturesque locations for photos. In five minutes by cable car, you can climb to the tops of mountains the Big and Small Saddle. If not to hurry with lowering, it is possible to make a fascinating journey along the ridge with two thousand meters and a clear sky to see the giant Caucasian mountain range and Elbrus.

To the Narzan gallery, the next point of the visit, man can walk down & enjoy the beauty of nature and take pictures on the review sites. The descent will take about a half-hour. The main Narzan baths in the Central part of the city, located on the street Zhelyabova, trimmed with fancy moldings with mosaic inserts. Tired travelers can enjoy free mineral water in several forms: sulfate, dolomite & normal. Moreover, in contrast to the Essentuki mineral waters, local water is safe to drink more often than three times a day.

Connoisseurs can pave a way through the Museum-estate of the artist N. A. Yaroshenko, state Philharmonic hall, where the great Shalyapin had once performed.

Kislovodsk – the "pearl of the Caucasus", the most southern resort, the most mountainous terrain. Kislovodsk is a cozy place where someone can spend time with benefits for body & soul. It is proved that a holiday in peace, surrounded by beautiful natural scenery, long walks with moderate physical activity relieve stress and bring a lot of positive emotions, the effect of which will endure.

Kislovodsk is the leading balneological & climatic health resort. It is located in the foothills of the Greater Caucasus mountain range, high mountains in the area are lacking. There are more than 300 sunny days per year, however, the weather is very changeable – it is the influence of mount Elbrus, located 80 kilometers from the city. The average temperature for the year is 7.9°C (highest CMS), the warmest month is June and the coldest of January. There is a lake in the valley of the river Alikonovka, access to the sea is missing. The average water temperature in summer is around +20°C. In contrast to the other resorts of the Caucasian Mineral Waters temperature changes in the city are least visible: this is the effects of the local landscape. Mountains surround the city, protecting it from cold winds & dry frosty highs.

Flora is represented by pine trees and a hazelnut, euonymus, crocuses, coltsfoot, the gentian, the wild carnations. Medicinal plants presented by the thyme, valerian, yarrow. Throughout most of the year in the suburban area of Kislovodsk, you can find field mushrooms, mushrooms, russula, boletus. In the valley, you can meet a mole, weasel, smooth; representatives among the birds - the blue tit, Jay, woodpeckers, finches, goldfinches, owls, and kites. In local waters look for trout.

Training in conditions of oxygen deficiency develop endurance, and therefore on the altitude of 1300 meters, there was built a complex for Olympic athletes’ preparation. The hills and foothills, rugged by streams, six rivers, rocks & dangerous cliffs, terraced caves and oddly-shaped stones form the unique terrain of Kislovodsk.

Visit one of the many family restaurants. Domestic cuisine is different, and the price of a standard lunch will be quite low.

However, for more mundane entertainment fans, Kislovodsk will be a discovery. There are plenty of bars, night clubs, and other no less interesting places, so beloved by nightlife fans. Recently, Kislovodsk is gaining popularity among active rest fans. Wonderful beaches, mountain slopes attract people from all over the world.

It is believed that Kislovodsk received its name from the source with acidic water, known as "Narzan". The soldiers built the fortress became the first inhabitants & founders of this city.

The largest Park in Europe is located in Kislovodsk. Its area is more than 1000 hectares. The park was laid back in 1823 by the order General Ermolov’s order. Historical part consists of fortresses that have seen fury of battles. Nowadays, these places are most revered by tourists. Amid picturesque ruins, fantastic photos are obtained.