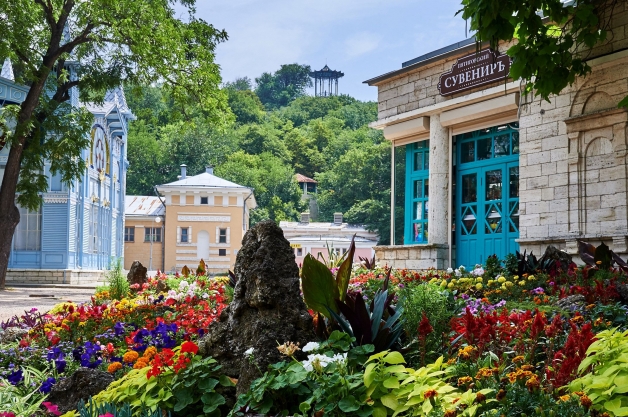 Pyatigorsk is the oldest resort town located on the territory of the Caucasian Mineral Waters. It is the capital of the North Caucasus Federal District, formed in 2010.

The very name of this city (that can be translated as Five Mountains) is connected with the mountains, and this is for a reason. It is really surrounded by a chain of mountain peaks, and the name of the city came from Mount Beshtau, which, by the way, is a sleeping volcano.

The city has a well-developed infrastructure, modern recreation centers, a lot of cozy cafes and restaurants, which offer guests astounding dishes of Caucasian cuisine, dozens of varieties of famous wines and tinctures. There will be no problems with accommodation. , There are a large number of hotels in Pyatigorskthat that meet all the requirements of modern-day tourists and room rates, as a rule, are very reasonable.

For fans of a more relaxed atmosphere, for those who came to Pyatigorsk to heal and rest from the worldly bustle, there are many places where one can find peace and tranquility. There are a huge number of parks, avenues, gardens, fountains in the city. There are also temples and in one of them – the Temple of the Three Saints, there is a particle of the relics of Saint Matrona.

The city is situated on a small plateau, 512 meters (1,680 ft) above sea level, at the foot of Beshtau, Mashuk, and three other outliers of the Caucasus Mountains, which protect it on the north. The snow-covered summits of Mount Elbrus are visible to the south.

The climate of Pyatigorsk falls within humid continental (Dfb) classification under the Köppen-Geiger climate classification system and is characterized by the absence of sharp fluctuations of annual and daily temperatures. Summers are steadily warm with the average July temperature of +21 °C (70 °F) while winters, lasting two to three months, are cold, with the average January temperature of −4 °C (25 °F). Spring is cool, with a sharp transition by the summer, and a warm, dry, and long fall. There is an average of ninety-eight sunny days in a year.

Pyatigorsk has a special climate due to the flat-mountain location. Mountains protect against strong wind currents, resulting in lower air humidity. Coniferous trees surrounding the city fill the air with flavonoids.

Warm winter and hot summer, numerous hot springs with curative mineral water, fascinating nature, cableways allowing to admire the magnificence of mountain peaks are all here. There is practically no bad weather! There are many sanatoriums on the territory of the city, which house tens of thousands of tourists every year.

As soon as the sun sets Pyatigorsk transforms into a paradise for lovers of nightlife. Blossoming with bright neon signs of all kinds of cafes, bars and clubs it turns into a totally different city. Incendiary music and entertaining show programs will not disappoint even the most exquisite nightlife aficionados.
Culture and history info

Pyatigorsk received the status of the resort city after the water that spurts from numerous sources here were recognized to have curative properties. It happened in distant 1803.

But not only mineral water and the healing effects it brings attracted people to this resort from all over Russia. There are a lot of interesting places and monuments in Pyatigorsk, this is a city with a rich history. It was here in Pyatigorsk were the outstanding Russian poet Mikhail Lermontov spent the last months of his life.

The symbol of Pyatigorsk is an eagle. It symbolizes the victory of good over evil and, indeed, having spent only a few hours in this city one feels an extraordinary surge of energy and all troubles seem to fade away.

One of the main local attractions is the Pyatigorsky Hippodrome. Every Sunday fans of horse racing gather here to watch the competitions. It is impossible not to mention the fur market - one of the largest in Russia, where you can buy excellent fur coats and other products made of leather and fur.