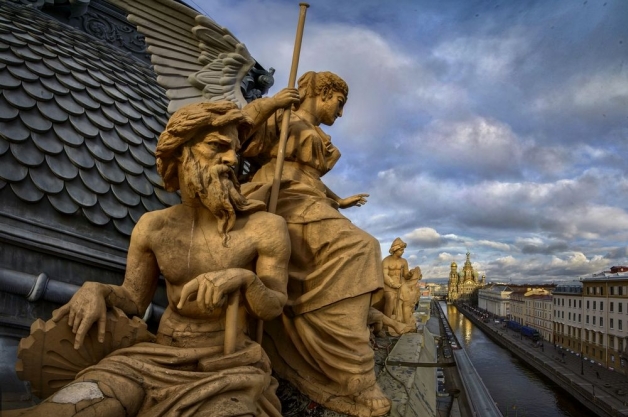 St. Petersburg, the city on the Neva, “Venice of the North” it is possible to compose various epithets of this extraordinary city, but the fact remains the same – St. Petersburg is a unique place. Thereafter, local people are unique too.

There are Rastrelli architecture, Hermitage paintings, the cradle of Russian poetry, Dostoyevsky and Brodsky, music of the group “Kino”, a place of the consummation of the last Russian monarchs in St. Petersburg. If one comes to St. Petersburg and does not admire the views of drawbridges over the Neva river, the architecture of the Kazan Cathedral, sculptures in the Summer garden and other everyday things for the residents of the city than something is wrong with the visitor. Although the townspeople are love with SPB they are meager in praising hometown. Never complain to Petersburgian that tickets to the Museum’s expensive, or whether it is raining two weeks straight, or the system reports-the bridges are inconvenient. In order to sustain good everyday mood locals, prefer being self-ironical and black-humored to some extent.

The well-known Saint-Petersburg is not the only city in the world that has this name. There are 15 other Saint-Petersburgs in the US. The city on Neva river is considered to have the deepest subway system in the world: the average depth is eighty meters. As for the deepest underground station – it is called Arsenalnaya 105.5 meters below the surface, located in Kiev.
Here in SPB local craftsmen created the largest on Earth renowned Tula gingerbread, which had three meters in diameter.

One of the greatest cities of the world was originally named after apostle Peter. The first name should be pronounced like Sankht-Piter-Bourgh. Overmore, some Dutch roots of the name Sint-Petersburg were discovered, as one may remember the Peter I used to live and study in the Netherlands. In 1720 the name of the city changed to familiar – St. Petersburg with the following abbreviations – Petrograd, St. Petersburg and modern Peter. During two centuries Saint-Petersburg was the initial cultural, political and administrative capital of the great Russian Empire. Saint-Petersburg is considered to have the largest tram network with a total 690 km line length.

Saint-Petersburg citizens adore the purity of the Russian language and have a large variety of specific habitus. People living in St.Petersburg use distinctive dialect which cannot be found anywhere else among Russian speaking people. Local pronunciation has special softness, slowness and seasoned with an unforgettable trail of uniqueness. They always prefer using the politest forms when referencing to a stranger, they might be insulted by the act of calling the stairwell and entryway of a block with the wrong Russian word (“pod’ezd” and “paradnaya”). The reason is simple – Saint-Petersburg’s living blocks have absolutely amazing antique style of the “paradnaya”. Petersburgian can detect a guest from another Russian city or a town by the way he or she accent marks certain words and, of course, locals read a lot. Saint-Petersburg has the greatest number of readers in all Russian Federation.

Every single narrow street, every little pew and each little rock of this majestic city is capable of telling a breathtaking story. So please, beware of Ekaterina and the reason why her monument posted on Nevskiy before communicating with Petersburger.

St. Petersburg is located in a temperate climatic zone, the climate of which is determined by the influence of North and West winds. This means that the winter season has no severe frosts, and summer is warm. Although there are no sharp temperature changes in the city, yet there is constant air mass movement which causes notorious winds and never-ending rains.

The climate of St. Petersburg can vary from the seaside to continental type with a high humidity level. The latter is the main factor of the famous local gloomy atmosphere. Throughout the year, thick air mass layers prevent sun rays to get through, causing extremely slow rainfall moisture evaporation. There are constant cyclones, changing the weather from cold to warm for a few hours in the city. For example, the cold Arctic air is replaced by the Azorean anticyclone, which causes drastic weather changes.

St. Petersburg weather is a widely known theme for many jokes and anecdotes, but it also contributes to the city color and the habits of the locals. The fact that the weather changes here 10 times a day is absolutely true. The outstanding St. Petersburg feature is cloudiness. There are only seventy sunny days a year on average – that means that four of the five days will be cloudy.

Over more, local frequent rains are considered to be almost a national treasure of St. Petersburg: nasty, drizzling rain can fall for weeks, drizzle that can be felt on the face and impregnates with moisture everything in the city. Permanent rains are topped with perennial high humidity levels - 60-70% in summer and 80-90% in winter. Even a small 5-degree frost may be felt of freezing to the bone.

Continuous moisture, continuously drizzling rain surely creates a special state of mind. If the person is focused on bodily sensations, he literally begins to feel unwell and ill. This atmosphere leads to the fact that a person needs somewhere to escape from these physical sensations, in order to somehow survive in the St. Petersburg climate. Therefore, every day on the streets of the city one can see the crowd of people fully immersed in their thoughts and feelings, so as not to aggravate attention to what is happening around.

St. Petersburg people treat white nights without much enthusiasm and find them inevitable disaster, when enthusiastic tourists cry crazed by this phenomenon do not allow sleeping at night. White nights period (app. From May 25 to July 15) a great opportunity to photograph the memory of drawbridges. This period is considered the best for visiting the city. The fountains are working and the Sun is shining.

The nightlife of St. Petersburg possesses tremendous offers of various entertainment: there are concerts of classical music in historical monuments arranged after midnight, pop and art fests. If you are interested in clubbing, pay attention to local dance clubs with their unique SPB atmosphere. St. Petersburg introduces numerous restaurants and bars to try a high-quality strong drink. All hookah bars, pubs, karaoke and the best night discos in Petersburg will give you the opportunity to dance, listen to the music and really relax in the Northern capital all night long.

St. Petersburg was the glorious Russian home-city to adopt underground culture clubs in the 80s. The nightlife began with the establishment of rock music and art clubs, with their peak of development in the 90's. This was the first rock club in Russia the cradle of the most important rock groups in-country), and also here were conducted the first rave-parties.

However, the Nightlife in St. Petersburg began to flourish only in the mid-1990s after most famous clubs of the city were opened. Currently, in St. Petersburg one can find an alternative and live rock concerts, jazz and art clubs with beer and interact with local people. Most places are affordable and rather relaxed.

After the sun sets over the horizon the striking beauty of the city would be opened. Night St. Petersburg is filled with beautiful lighting of the old streets and delightful buildings. During the tour, some guides offer tea and play guitar. For connoisseurs, there are even tours on the roofs of the city! This brings the romantic atmosphere and introduces visitors to the cultural part of the Northern capital.

Petersburg city history is"unusual" from the very moment of initialization. An absolutely specific trait about it is the fact that Saint Petersburg did not evolve naturally from a small village. At most "unnatural conditions" for the city sovereign. St. Petersburg's story began from the "Royal whim", of revolutionary decision to create Grand "Paradise", "the dream city", etc.

Nevertheless, Saint Petersburg had been regarded as "the brainchild of Peter", cherished by the royal dynasty. Reverting to the chronicler Nestor writings Torkel (Sweden military) establishes Landskrona fortress also known as "Crown edge" in 1300. The new settlement was eliminated by Novgorod people unwelcoming the new "neighbors".

200 years Novgorod owned the bogs, until 1616 when the Swedes made an attempt to "renew" their fortress and lay the city foundation at Okhta river. In 1703 Peter with the Sheremetyev’s troops besieged and conquered the city, renaming it to Shlotburg. New inhabitants sent by the Petrovsky decree arrive in Shlotburg (Nienshanz) in 1714.

Russian Empire obtained second capital on May 16, 1703. Emperor Peter was full of intention to install the "Sankt-Piter-borough" fortress.

Grand construction works started from constructing a single battery, where on June 29 the first Banquet for the guardians from Nienschantz was held.  From 1716 to 1787 dams and paved roads, mills and military fortifications were created. The Palace of Peter (Birch island) and Saint Trinity church considered being the first buildings. Next to the Emperor's house located Menshikov house, the first factory of sugar production. Peter I paradoxical idea was to construct the city outside of the fortress area. The act of choosing the location of the capital outside state borders was unimaginable. Later the event would be entitled "window into Europe".

The Admiralty was created in 1705, in 1709 the first ship leaves its shipyard, and in 1718 Empire possessed three hundred galleys and forty warships. Saint Petersburg became the official capital of the Russian Empire (from 1712 to 1918). And the history of great opposition of Moscow and Petersburg begins.

Confusion in the question of succession caused political turmoil (1725-1741): although Peter I rejected the principle of primogeniture, but not having left an appropriate testament. During the following Elizabethan twenty years in St. Petersburg Palace construction blooms, the Arts Academy started its work. First Russian academicians Lomonosov, Trediakovskii became famous.

The state Russian Bank was opened, where copper coins were minted, orphanages, shelters, and public hospitals appeared. Hermitage Museum with the library was constructed.

In 1777, the capital of the Empire was inundated, more than a thousand lives were taken in a few hours.

St. Petersburg's history during Nikolay (1825-1855) commemorates the revolt of the nobles in the Senate square: the country no longer strives for western culture.

At that time, the capital of the Empire, as well as the whole of Russia itself, is home to an industrial rise. So, the first highway Petersburg-Moscow (hard surface roads) was built; a railway, while the number of residents was growing rapidly.

The reign of Aleksandr II (1855-1881) is often called the deliverance time with numerous economic reforms, that triggered development. However, the history of the St. Petersburg during Aleksandr II epoch is bonded with "regicide", "red terror" and "revolution." Alexander II was killed on the way to underwrite new Constitution…

Nikolay II – the last emperor 1894-1917: Rapid economic growth, three wars (Turkish, world and civil), three revolutions, the collapse of the Empire and the tragic death – this is the shortest canvas of this period.

After the 1905 war defeat intelligence and national workers – united in a single revolutionary discontent. January 9, 1905, turned into the execution of more than 2 thousand demonstrators. Paradoxically, cultural life bloomed into the so-called silver century, which incarnated in all forms of art of St. Petersburg.

After the October revolution, St. Petersburg has deprived the capital status. For seventy years it became the city of Lenin - Leningrad. Under this name, the city resurrected after the civil war, got through the terrible years of the blockade (872 days) and now is raising new heroes, new creators, new owners of the new city on the Neva.

In 1991, and officially in 1992, the city again received its historical glorious name – St. Petersburg and here begins the next round of its history.