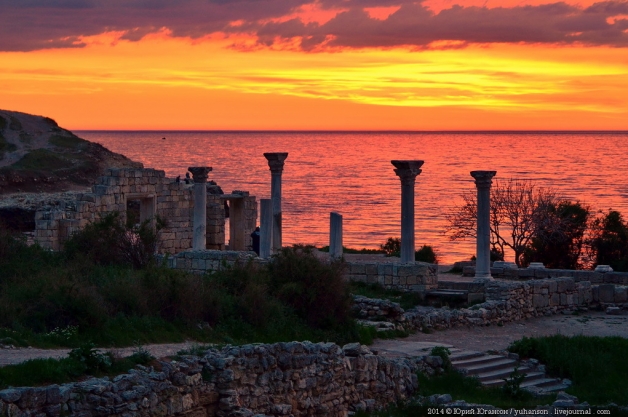 The Russian city of Sevastopol is the second largest Black Sea port, military base, industrial, technological, fish and trade center, the water in the bays of which does not freeze in winter. The city is located on the Heraklion peninsula. The region of Sevastopol, including the water area, occupies an area of 1080 square kilometers, four-fifths of which are land.
The population of the region is 428,773 people with many nationalities in addition to Russians, including Jews, Moldovans, Tatars, Ukrainians, and Belarusians.

At the end of the Russo-Turkish War of 1768-1774, in order to strengthen the position of the Russian Empire in the Black Sea region, Lieutenant-General A.V. Suvorov suggested setting up a port in the Sevastopol (formerly Ahtiyar) bay. Catherine II signed a decree on the construction of the fortress Sevastopol by count Potemkin on February 21 (June 3, according to a new style) 1784. A year earlier Sevastopol was given the status of a city. The meaning of the Greek word “sebastos” is equivalent to “August” – lat. Augustus – “sacred, great, honored”. And in twenty years the port of Sevastopol will be declared the main naval military port on the shores of the Black Sea.

The city’s coat of arms, created in 1969 by Nadezhda Krylova and Sergei Shakhunov, in which the authors managed to unite the fighting courage, fame and heroism of the inhabitants and defenders of Sevastopol, is of special pride and awe. The emblem depicts a silver-azure shield with a branch, a gold medal and a monument to the lost ships. The azure (blue) color personifies the sea, and the silver one is a white stone, with which the city was mainly built. The Laurel branch is a tribute to the ancient Greek origin, a reward of glory, a symbol of greatness and wisdom. In composition, the laurel branch serves as a symbol of the unifying series of major military battles and short periods of the peaceful existence of Sevastopol. The second element of the coat of arms is a sign of a special difference, the Gold Star medal, received by the Hero City in 1965. The third element, perhaps the main attraction of the city – a monument to the flooded ships, created by the Estonian sculptor A. Adamson in 1905.

The monument is dedicated to the famous episode of ship squadron sinking in 1854-1855 war. After the defeat of the Russian troops in the Battle of Alma, the enemy combined flotilla of France and England possessed thirteen linear, eight screw ships and 33 steamships. The Russian defense consisted of fourteen battleships of an earlier age, which were not able to leave the bay without assistance or strictly favorable wind. For reference, “linear ships” – English. Battleship – are armored, artillery-equipped ships.

There are many versions of how the military council of 1854 took the decision, where Prince A. S. Menshikov, as well as the Chief of Staff of the Black Sea Fleet, Vice-Admiral Kornilov, and Vice-Admiral P. Nakhimov took part. The latter, according to some sources, supported the idea of a certain Zorin, the captain of “Selafail” ship, to sink outdated ships across the fairway (the Dutch “vaarwater”) – the main sea route to the bay. Artillery guns were removed in advance and placed in a coastal battery and redoubts. Thus began the First Defense of Sevastopol, which lasted 349 days, culminating in the victory of the Russian Empire. Later, out of 75 sunken military and 16 auxiliary vessels two dozen were raised from the bottom of the Sevastopol Bay, which, after some repair work was returned to service. In the heroic past of Sevastopol, unfortunately, there was also the Second Defense in 1941-1942, which lasted 250 days.

It's hard to imagine a more diverse landscape than here. Mountains, plains, forests, steppes ... This is one of the most resource-rich places in the Crimea. The beaches of Sevastopol are ideal bays created by nature itself.
he Sevastopol region occupies an important geopolitical position on the map of the Black Sea, in the south-western part of the Crimean Peninsula. It has navigable fairways in all 24 bays, among which the largest is Sevastopol. The eight-kilometer ice-free bay is the third most convenient bay in the world (after Hong Kong in China and Sydney in Australia). Inside it there are seventeen more bays. Swimming birds flock to Ahtiyar bay (the obsolete name for the Sevastopol Bay) for wintering from all over the Crimean peninsula. The landscape of the coastline is numerous rocky cloughs, the rest territory of the region is hilly, steppe, mountain valleys, and mountains, there are sea grottoes, as well as Belbek, Kacha and Chernaya rivers. At the time of the Paleolithic, these rivers were more full and abundant in fish, and pine forests covered most of the territory of the Sevastopol region. The main mountain ranges are the Balaklava heights, the Mekenzian mountains, the Karata Upland and the Sapun Mountain (240 meters).

The city of Sevastopol is located at the intersection of temperate and subtropical climatic zones, and therefore it features both the soft Mediterranean and continental climates. The temperature of the winter period is + 2.5 ° C, summer +22.3. Swimming season starts from the first days of June and ends in September, and Indian summer in October is not rare with temperatures reaching up to + 25 ° С. In May the fog season begins. The summer heat is relatively easy to tolerate due to the breezes blowing from the sea. The warmest month is July. The average annual temperature in the region is + 12.2 ° С, and the annual precipitation is 340 mm. September is a season of sea storms. Snow cover can be observed only on Mount Ai-Petri. Sevastopol residents often do not change tires in their cars for the winter season. In February, and sometimes in other winter months one can observe a peculiar phenomenon over the water area of Sevastopol - sea steam, which happens due to the difference in temperature of the water surface and atmosphere of 8 degrees or more.

The main endemic plant is the Stankevich pine, growing on Cape Aya, in the vicinity of Sudak. Local flora counts 2612 species of plants, among which there are also medicinal plants (gentian, horn, sophora, sage, lavender). The most characteristic trees for the Sevastopol region are hornbeam, Crimean pine, cypress, beech, in the mountains there are cornel, strawberries, linden trees, melilot. Alpine meadows are located on the plateau-yayla (altitude more than a thousand meters above sea level). 324 km² of the Sevastopol region is a state reserve, 3 preserves, 4 nature monuments, among them the scenic Cape Fiolent and the picturesque Cape Ayia.

It is always good to have an opportunity to rest after hard work. Sevastopol has plenty of venues for entertainment. Clubs, discotheques, bars. Here one can find everything that nightlife fans value so much. But ... This is not the reason why most tourists come here.

Tauric Chersonese is a city-state, the name from the ancient Greek is translated as the "peninsula", was founded in 422-421 by settlers from Heracles of the Pontic. The latter was an ancient Greek polis located on the territory of the modern Turkish city of Ereğli near the river Aheronth.

Near the Sevastopol were discovered man sites of the Mesolithic period from 10,000 to 5,000 years BC. The remnants of settlements, bows with arrows and fireplaces were preserved in the Inner ridge of Murzak-Koba mountains (near the village of Alsu), Fatma-Koba (Baidar valley).

The fertile land of the valley retained the evidence of human settlement from II-I millenium BC in the form of ceramic dishes with a relief ornament. The landscape features of these archaeological sites are the presence of a waterfall and grotto. A burial place of a hunter was found in Shang-Koba, a 40-year-old man, who was assisted by a tamed dog. Here, they also found some kind of provisions storage in the event of an unsuccessful hunt - alive snails were collected in the natural pit in the grotto. Tribes inhabiting the Black Sea area in the III-II th. BC was named by the scientists by the names of man sites - kizil- and kemi-obints. They worshiped the sun, rain and had their own calendar.

Chersonesus was conquered by Diophantus who was the commander of Mithridates VI the Eupator of the Bosporus principality from the end of the second century BC, and later under the control of the Roman Empire. Named Kherson it will become part of the Byzantine Empire from the middle of the V to the IX century.

During the siege of Korsun (Slavic name of Chersonesos) in 989 by Prince Vladimir the Great, the baptist of Russia, they destroyed pottery pipes (aqueducts), which supplied the city with drinking water. After winning he married Armenian Anna, the sister of Vasily and Konstantin, the Byzantine emperors.

Cyril, the Brother of Methodius, in the 'Pannonian Lives' will mention that in 860 he bought holy books of scripture and the New Testament in Chersonesos, which were written in the language of Russ people.

By the end of the XI century the Crimean peninsula was captivated by Polovtsy nomads, and later by the Mongol-Tatars. In 1443 Korsun will be part of the Crimean Khanate, from 1475 - the Turks-Ottoman Empire.

In the 15th century, a Tatar village Ak-Yar ("white cliff" from the Tatar language), or Aht-yar, would appear on the territory of the destroyed city, hence the name of the bay - Ahtiyar, later renamed to Sevastopol bay. After Russian-Turkish wars, a peace agreement of July 10, 1774, envisaged the bay with the settlement to be under the protectorate of Russia. The commander of the Russian forces, A.V.Suvorov, will clear Akhtar harbor from one hundred and seventy Turkish ships and will initiate the creation of a naval military base here. "Brave" and "Careful" were the first frigates in 1782 to throw their anchors here, and the next year another fifteen ships will arrive.

Catherine II by a decree of February 10, 1784, will name the city Sevastopol and will order Grigory Potemkin to establish a port for the construction and equipment of military ships of the first rank, fortress and military settlement for four thousand military officers serving here.

Emperor Pavel I will cut the construction budget and also for a short time will change the name of the majestic city (until 1826). In 1818-1820 two beacons were built of 40 and 122 m height for the safe passage of ships at night. In the years to come, a number of state-owned factories were built here to produce brick, lime, and bread. In 1815 the first two alcoholic factories were established. By the twenties of the XIX century, Sevastopol became the largest city of the Crimean coast and the main military port.

In 1853-1856 - the years of the Crimean War against the united troops of France, Great Britain and the Kingdom of Sardinia, Sevastopol will survive its first legendary defense of 349 days. During the preparation for the battle, defenders were ordered to sink 75 warships and built a defensive wall from the unprotected side of the fortress from baskets with stones and land, reinforcing it with guns from flooded ships.

Only fourteen years after the end of the war the life returned to the city and for the first time, the place became a popular resort destination.

After World War I Hitler dreamed of creating a "Theodorich harbor" in the territory of the port, which is why the elite troops will be sent here. The heroism and prowess of the defenders of Sevastopol managed to keep the 300,000-strong German army for 250 days. The city was completely destroyed but rebuilt from a scratch. In the summer of 1944, the first train with food and building materials will arrive here, and in ten years more than thirty thousand builders and workers, led by N. Proskuryakov, will officially complete the city's complete restoration. The territory of Sevastopol will increase by one and a half times.

In 1965 Sevastopol will be awarded the title of the hero city.