Fascinating facts about Russia, the biggest country on our planet 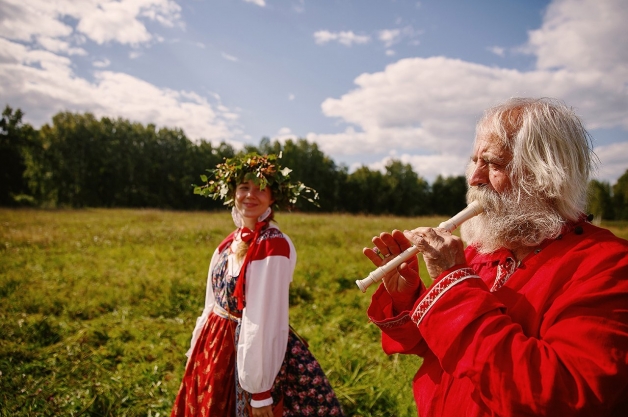 Fascinating facts about Russia, the biggest country on our planet

The vastness of the Russian area remains a surprising fact for the world community. Besides, this land is like eternal mystery covered with brilliant blanket from snow and the tops of forest trees.

What is of Russian land generous for and why her whimsical nature is replaced by friendly smile, threatening shouts, or tender & gentle arms?

1. Russia is washed by a dozen of the seas – Baltic, Black, Azov, Barents, East Siberian & Kara seas. And also the Laptev Sea, the Chukchi, White, Bering, Okhotsk & Japanese seas. No other country has such an amount of "marine satellite".

2. The Ural Mountains are the oldest on our planet.

3. 4 kilometers in the North separates Russia & the USA

8. The deepest lake – the Baikal with 1 642 m depth and a strategic resource of freshwater – 20% of inventory of land.

9. "Magnetic" mountain of iron is located near Magnitogorsk city.

10. 45% of the state is located within the Arctic circle.

11. The population of Russia in 2020 amounted to 146 million people. It looks like pandemonium of morning trips in Moscow metro. More surprising fact about – a third of the world's forests accounts for taiga, whose amazing natural beauty will see soon the first man because of its proud inaccessibility.

2. Some small nations are endangered. Their amount does not exceed 10 people!

3. Shamanism is popular among Northern inhabitants. Although in Soviet times the shamans were exterminated by government, they are still in great demand.

5. Three regions adhere to Buddhism, rather than Orthodoxy Christianity

6. An interesting fact from Russian history: Chukchi are the most militant people. The Russian Empire was unable to break their free spirit, then they were left alone.

7. Scientists from England have established the relationship between Bashkirs and the Celts!

8. Russians – the most numerous people in Europe

1. Cabbage soup is not only soup but also a refreshing drink. In ancient times it was prepared from malt, and after fermentation was bottled in a tightly corked bottle and served as a miracle cure from hangover

2. Forget about the conviction that borsch must be red. During the middle ages, it was associated with a gray-greenish color, as cooked from green Bush with sour leaves.

3. Vodka didn’t appear in Russia from the beginning of the state development and we should not believe the imagination: till the 15th century, the main alcoholic beverages were beer and honey drink.

4. In Ancient times sugar was an unheard-of luxury.

Until the 18th century, only wealthy people could afford it. Honey was used instead of sugar.

5. One more expensive in Russia is salt. It is difficult to imagine sauerkraut and pickles without salt, but some times before fermentation took place without it.

6. Sushi is more popular there than in Motherland

7. The most visited McDonald's is situated in Moscow on Pushkin street.

1. Attractive fact about Russia: in St. Petersburg's Hermitage 3 million works are held. To explore each exhibit briefly, art lovers will have to spend 8 years here. There is official army of fluffy pets - the "cat police" in Hermitage that protects the treasures of culture from rodents.

2. St. Petersburg has three times more bridges than in Venice

4. In Russia, men were met not by clothes, but by the beard. Beard was considered the man’s dignity, and those who rare beard often remained unmarried.

5. Alexander Sergeyevich Pushkin – the owner of the richest vocabulary among the Russian estate. His speech consisted of 25,000 lexemes.

7. There was a "beggar bench" in Russian huts, that was put at the entrance of the house. People left food there for poor or unexpected guests.

8. A jocular belief that the Russian fight with bear is not just a comic assumption. "Bear fun" - old & favorite pastime of the Russian people, popular until the early 20th century, despite regular bans.

9. After the Second World war, Japan and Russia never signed a peace Treaty. And 71 years have passed already!

10. The TRANS-Siberian railway – the longest railway in the world, nine thousand kilometers uniting Moscow and Vladivostok. Imagine, that even the flight consists of eight and a half hours - half an hour less than New York, but here we are talking about the same country!

11. The Russians are not gloomy, just serious. In Russia, almost no one will smile to stranger. But it is not necessary to include people in the list of unfriendly on this basis. Proverbs - the mental mirror of people. “Laughter without reason is a sign of foolishness” every child in Russia has heard it since childhood.

1. An interesting fact from Russian history: the oldest city in Derbent in Dagestan with an age of 2,000 years. It is said to be erected by the Persians.

2. Moscow has the highest university in the world - Moscow State University with 40,000 rooms and 32 floors!

4. Camel is depicted on the coat of arms of Chelyabinsk city

5. The Kremlin is the largest fortress of the Middle Ages. This sightseeing was built on 1482-1495.

6. St. Petersburg’s metro goes into a depth of 57 meters. It is the deepest in the world.

7. The coldest city in the world is Oymyakon.

8. Perm is called the third largest city after Moscow and St. Petersburg.

9. In 2002, Yekaterinburg entered the list of 13 most ideal cities according to UNESCO.

10. Another interesting fact is that the frame for the US Statue of Liberty was made of metal from Yekaterinburg.

11. A country house is a promised land for citizens who seek to leave stuffy "millionaires" on Friday evening. Contrary to the opinion that the concept appeared in the Soviet era, becoming an object for witticisms & anecdotes, it was first used among the nobility in the Petrine period. Etymology is commonplace - it is short from "given by tsar."