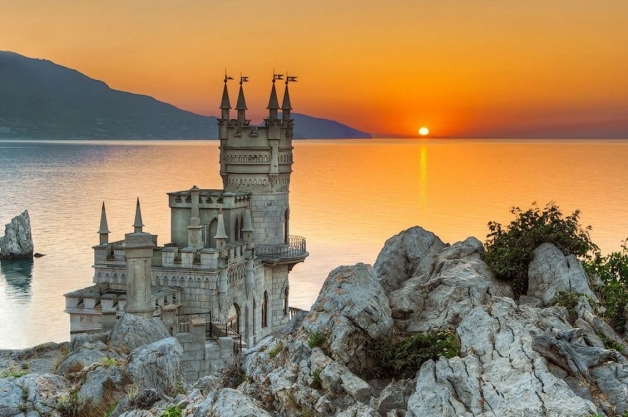 This city is a true capital of the South of Crimea: Yalta, or as it is often called – “Russian Riviera”. The magnificent climate was highly appreciated by the imperial family. The latter owned an estate called Livadia here. And now, tourists and vacationers reach out for Yalta from all over the world.

What is Yalta? Yalta is the sea and picturesque beaches. Thousands of tourists prefer this resort to any other and yet every year, this figure is only growing. Most of our Russian compatriots often claim that Yalta is a far better option in comparison to Turkey or Egypt.

There are excellent conditions for outdoor enthusiasts. Diving, sailing, hang gliding, climbing the mountains. Fans of extreme sports are certainly not bored. And at the same time…

Yalta is the best suited for a family holiday. Sea, beaches, attractions. Quiet parks and mysterious alleys set up a romantic mood and inner peace and harmony. The city abounds water parks and entertainment for children and their parents.
So, if you chose the south Crimea seaside, then only in Yalta. This magical place is amazing from the first minute. Forward friends, adventures and good rest.

The climate in Yalta is very similar to the Mediterranean one. Hot summers and warm enough winters. The sea never freezes and the sun shines 2300 hours a year. Almost like French Cannes or Nice. The swimming season usually opens in May and lasts until mid-October. The average temperature of the water at this time of the year is +20 degrees C.

Yalta is a real gastronomic Paradise. The city has many cafes and restaurants. From luxurious, offering exquisite meals either for business or romantic dinner, to a small family cafe or restaurants with unique cozy surroundings and relaxed mood. The cuisine is mainly Ukrainian, Russian and European. And, it is important to mention the wine ... the world-Famous "Massandra" is served in each eatery or pub in the city.

Yalta's nightlife will not let you get bored thanks to the variety of choices of coffeehouses, pubs, bars, clubs, and restaurants. Live music that would impress, pleasant talks that would be accompanied by good mood - all the ingredients that a traveler might need to create an unforgettable evening.

From a historical point of view, Yalta is a precious open-air Museum. There are many scattered monuments throughout the city, mainly in its old part. Some of them are very ancient and of great value. A sightseeing tour of Yalta includes visiting local churches, palaces, a Film Studio, a cable car, the ruins of a medieval fortress. You can walk around the city all day and yet discover new interesting places. Every year Yalta hosts various festivals dedicated to cinema, theatre, painting, and music. Though…

The main attraction of Yalta, considered to be nature. Sea, mountains, exotic plants, gorges. Panoramic breathtaking views from Ai-Petri are fascinating. By the way, the city has many gardens, alleys, and parks.